Anecdotes
In my years of working around aircraft here in , I developed a respect for the inherent danger of turning props, fuel trucks and deicing equipment. Back then, while deicing hundreds of planes so they could fly safe, I sometimes wondered as to what extent future clean-up crews would need to go to excavate tarmac and the contaminated dirt beneath; if we ever relocated the airport. Now as that day approaches; it will be interesting to see how the airport authority handles this, as well as seeing what safety standards they set in place for the new airport, regarding innovative heated deicing booths with environmentally safe collectors for the polluted fluids.
Meanwhile, while recently recounting some old stories about airport safety, a friend suggested that I write a few of these down for the public’s enjoyment. So here goes:
While first training to be airline worker in , my co-workers told me about an incident involving Horizon Air’s initial flight into the . Back then, Horizon was flying trendy 17-passenger Fairchild Metroliners. They had a pilot and co-pilot, but no flight attendant. If you were above average height you would need to duck to negotiate the way to your seat. The Metros had two luggage compartments; one in the rear or aft of the plane and a second smaller one with doors on each side of the nose. If you were a ramp worker, you needed to remember that the luggage compartment in the nose of the aircraft did not pressurize upon takeoff. Therefore, you did not load objects affected by high altitude, especially pets into the nose!
Milt Kuolt was the primary founder of Horizon Air and the 1981 christening flight into was a blue ribbon ceremony. Mr. Kuolt also owned Elkhorn Resort; thus he was following the same successful formula Averill Harriman used transporting Union Pacific railroad passengers into . For that first flight though, someone had forgot that basic safety tenet and loaded the founders’ dog into the front of the aircraft. Fortunately, the dog only had a slight case of the bends and was resilient enough to shake it off after a few hours.
With this in mind, it’s remarkable how for my own first training flight, a comparable mistake almost occurred involving another Metro. It was November of ’93 and I had just returned from after passing the rigorous exams Horizon gives to prospective employees. During our training session out on the ramp, three co-workers introduced me to our pilots and then showed me the protocol for loading the aircraft. We secured the luggage doors properly, and although we were under pressure for the plane to leave on time, some last second passengers arrived and our ticket counter kindly decided to accommodate them. Suddenly, my co-workers started running around the ramp in a tremendous rush so we could maintain an untarnished on time record. As I was being trained to haul the GPU away from the props after we jumpstarted the plane, I noticed one of the workers open the doors to the nose of the aircraft in case we needed to store some carry-ons. The passengers got on, we started the plane and it went down the taxiway in good time.
However, a few minutes later the plane suddenly returned to our ramp area. Turns out that in our great rush to get the plane out on time, nobody had re-secured the far nose door! Further compounding the safety issue with this door, was that there no “open door” indicator sensor attached to the nose doors for this model of aircraft. Furthermore, from the cockpit it was impossible to see if the Metro nose doors were secure. Fortunately, an alert airport tower controller noticed the door swinging open as the Metro approached the runway from the taxiway and radioed our pilots about the problem. I shudder to think what could have happened had that plane actually taken off with the nose door open. And finally, when it did take off securely, I’ll never forget that after the co-pilot called in his times over the radio, he added: “And way to teach that new guy the ropes, Darcie”![1]
To be continued…

It’s remarkable how some Idahoans who are connected with the nuclear industry are downplaying the horrific events in . While some of these officials say they are confident that a similar event could never happen here, I sense a credibility gap and I’m unsure whether they are seriously taking into account all contingencies.
*
For instance, what about the fact that the INL operates amid an earthquake zone; one strongly active in recent times? On the 20th anniversary of the 1983, 6.9 Borah earthquake, STEPHEN WEISER, Assistant deputy director of mitigation for the Idaho Bureau of Disaster Services said " is extremely vulnerable to earthquakes and has a great deal of seismic activity.”
*
Besides occasional earthquakes, other challenges that the purportedly fail-safe and “clean” nuclear industry needs to contend with are the possibilities of terrorist attacks, infrastructure wear and tear, discontented employees, and plain old human error. Then there’s the proud legacy of nuclear waste. Our Country stores more spent fuel rods than does, and this insidiously deadly radiation will endure an epoch tenfold longer than the most ancient Egyptian pyramid.
*
100 year events sometimes do occur within our lifetimes: 9-11, , Hurricane Katrina, The Indonesian and Japan Tsunamis, exploding, the Teton Dam bursting or even spring flooding in Woodside. It’s downright disingenuous for putrid plutonium propheteers to claim that a nuclear accident could never occur here; especially when one already has. We will be stuck on the road to ruin if our leaders continue to be too shortsighted to plan no further than the next election, muffle whistleblowers so we don’t learn from our mistakes, and neglect to upgrade nuclear plants to high modern standards; trading short-term gain for long term environment disaster. 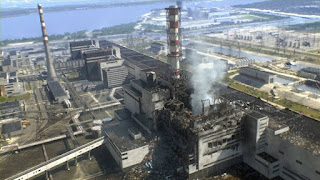