Interesting that there are believed to be 100 such tribes sprinkled worldwide. A year or two ago, I remember reading about someone who tried to make contact with an island tribe, resulting in dire consequences for the person attempting contact. Seems that the desire to stay out of contact with the modern ‘civilized’ world is part of some tribe’s religions.

Some of the most revered indigenous peoples in the area where I now live, were the Sheepeater Indians. They wintered in high areas, modeling their way of life by following the Mountain sheep and using every bit of an occasionally harvested sheep for meat, tools and clothing. Most were captured or killed in the late 1870’s. However, The Idaho Historical Society notes that some Sheepeaters “eluded the army and a few families continued to live their mountain life unmolested in its ancient pattern for another decade.”

Some anecdotal evidence indicates that there is a good chance that some families went to live on several decades longer than what the historical society indicates. Sometimes I fancy that there still are a few of the old ancients up in the quietly following the Mountain Sheep. 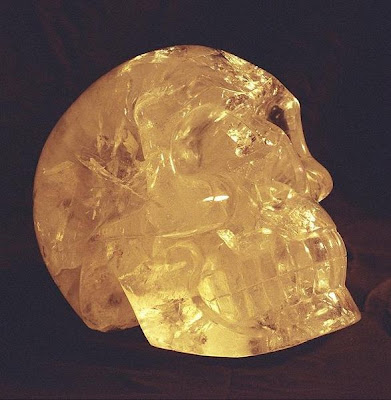 Saw Indiana Jones and the kingdom of the crystal skull today. I had been following this most interesting subject for several months and recently began reading Rob ’s 1991 book, Crystal Skull. I’m not very far into the book yet, but towards the beginning, a crystal skull is stolen under mysterious circumstances. Within a few days of reading this, I experienced an amazing synchronicity and read that a real crystal skull was stolen in Claremont, Ca. As a prime example of how life imitates art, the theft took place at the exact time I was reading the fictional account in bed one evening.

I e-mailed Mr. the details of the real theft, figuring that he had probably already heard about it. Actually though he had not and provided a few insights into how publicity conscious the types are, over such subjects. Part of me had been wondering if indeed the theft had been part of a publicity stunt. But for now, that’s too hard to guess.

For a succinct gaze at the story behind crystal skulls, here is another good article.

P.S. Here is the response Rob wrote to the last linked article; Not sure if they've posted it yet:

I enjoyed this article because of its emphasis on a connection between the crystal skulls and a higher order of energy or consciousness. While such a connection is speculative, I find it far more enlightening and uplifting than the debunking article on crystal skulls published in a recent issue of Archaeology Magazine. In that article, the skulls under scrutiny were called 'frauds,' lacking ancient authenticity. Demoting crystal skulls to the realm of fakery removes the mystery and denies the mythology. Such reductionist science intentionally overlooks the spirit realm, because it's difficult to quantify, and focuses only on the material form that can be measured and analyzed. But there's more to nature and mankind than the physical realm, and this article merges those two realms. It also shows that the scientific analysis on the age of the skulls might not be as accurate as the researchers would like us to believe.
Rob MacGregor (author of Crystal Skull, Ballantine, 1991).

Lots of interesting events in the Forest.

We've been a National Historic District for several years.

Our Amphitheater is to be recognized this Fall as a WWII Memorial.

Our Association President guides County citizens through
our Forest on what is called locally a WalkAbout.

Check our web site: www.capaccess.org/forest for all this news.

Hope you all are doing fine. We're the same.

Power dream
My brother David and I were walking down an old town hill in , where every few minutes we would see a different dump truck driving around with the dump section of the truck still up, partially in the air. We realized how dangerous this was, since any second, one of the trucks might snag an overhead power line, resulting in some sort of catastrophe. There was a weird array of power lines all around the area, with some of them holding quite high voltages.
Suddenly, an antique looking lawnmower came toward us, buzzing up the sidewalk. We took a close look as it approached and realized that nobody was operating it. A police car had passed by the self-operating lawnmower seconds before and we wondered why it did not stop to investigate the runaway machine.
Suddenly we floated up in the air, slightly spinning about, like two angels. Now we were dipping near the power lines ourselves. Each time we approached a power line, while we were flying in our bodies, it seemed that we would easily clear it, but then suddenly something would happen, like a gust of wind or some other slight parameter shift, to push my head very close to a power line. These close shaves made me start wishing that I had gone in for that haircut appointment last week when I had the chance.
Although Brother David was floating next to me all of this time, he was having less trouble than I. To attain better steering control; David grabbed my furry forearm, which seemed to have some effect. Finally, it started dawning on me that this all was a big dream, but mostly because of the dump truck and lawnmower clues. The flying part still seemed quite natural and in my core, I thought, you know this flying happens all the time and felt strongly that I was right.
at May 21, 2008 No comments:

When that sweet little innocent lamb, Mary-Anne from Gilligan’s was busted for wacky-weed over in Driggs, I wondered what pages the various papers would run this story on. I noticed that the Idaho Statesman ran it as a page-2 article, which seemed perfect. Although the story was one that most everybody was talking about that week, how much substance did it truly have to be considered a page-one story? Mary-Anne must have stimulated some interesting dialogues for editorial boards around the world that week. I wonder if the Newseum looked into this important topic of page placement for Gilligan’s Islanders, when this sweeping news broke out.

Small fire at Ketchum's Community Library
I find it interesting that after being assured by our local library staff of their diligent fire-safety efforts and writing about it in Kudos to Library visionaries,they still incurred a small fire two weeks ago. This was partially due to their forgetting to unplug the heat tape from their roof-gutter drainage system, once the weather finally warmed up around here. A construction worker across the way noticed that the library roof had begun to smoke up and alerted the Ketchum Fire Department in the nick of time.

Monty Python - It's The Arts

What cipher is required

His pathos leak was sprung

A spell under him

Roll when you fall

A walk with me and guilt again

I . his car last night

Freedom loving citizens should be aware that we have had several recent cases in our police state; where officers raided buildings suspected by circumstantial evidence to have illegal drugs or drug-producing operations; only to find tomatoes, fish tanks or kids playing video games.

With their guns drawn, police in Pullman, Washington serving a marijuana search warrant, found a green leafy plant material, which turned out to be tomato plants.

In Brooklyn, New York, while searching for a meth lab, police broke down the door of an innocent couple, only to discover a fish tank and the chemicals needed to maintain it.

In another recent case, an upward spike in a family’s power consumption alerted police to a potential marijuana growing operation. When they raided the house, officers discovered that the family was merely playing video games in the basement. They received some new games for Christmas and had been ceaselessly playing them since - which explained their higher than normal electricity bill.

The children hardly noticed the real police breaking into their own basement, as they were fully engrossed in a killing spree over a virtual Afghan poppy field. When the police announced that the family was in the clear, it made me made me wonder, if perhaps there is a place somewhere where the scales of justice are not so topsy-turvy, where peace officers give families friendly reminders that it’s not so healthy to revel in imagined killings.

Stairway To Heaven - The Beatnix